by The Panama Collection

This isn’t really a full blown newsletter, but I thought you might like some recent photos so you can see how the project is taking off.  First let’s start with the houses:

We just started on our seventh house, for Betty on lot 8. It was just started two weeks ago, and already the foundation is taking shape (photo below).  Hopefully Betty will be moving down from Texas later this year, and providing free dental care for all of her neighbors (okay, I’m kidding!). Yvette’s house on lot 15 is almost complete, and hopefully she also will be moving down sometime this year (photo below). Yvette, your wrap-around porch is getting rave reviews from everybody who sees it. Leo and Willy came in to visit, and did some major clearing around their guesthouse (photo below). Now they have fabulous views in all directions. Meanwhile Bob and Annie on lot 10 are right on schedule to finish their house in a few months (photo below). You might want to check out Annie’s interesting blog, which describes their life in Panama – it’s well done and quite entertaining (panmaniacs.wordpress.com).

Since smelling the roses is one of the core principles here in Paradise, there have been a number of pool gatherings in the last few weeks. Here is a typical afternoon with Leo, Willie, Bob and Annie (photo below). For those of you planning on a pool (which you all should be), we have found that the water temperature year-round is between 81 and 84 degrees Fahrenheit – cool, refreshing and perfect.

We continue to have new visitors from Mother Nature. For those of you who haven’t seen the pics, we have a couple of coatis that come around occasionally and mingle with the agoutis (2 photos below). When you come down you’ll have to learn all the names of the weird animals around here. Coco the squirrel has returned after a six month absence (photo below), and Loco and Twinky say hello to everybody (photo).

Last but not least (for those of you who care), the fishing/spearfishing continues to be outstanding (3 photos below). Last year was probably the best dorado year we’ve ever had, and when my brother Scott visited over the holidays I introduced him to spearfishing. Okay, I’ll say it – big brother big fish, little brother little fish……..  🙂

That’s it for now; here’s hoping that everybody out there has a fabulous 2015. 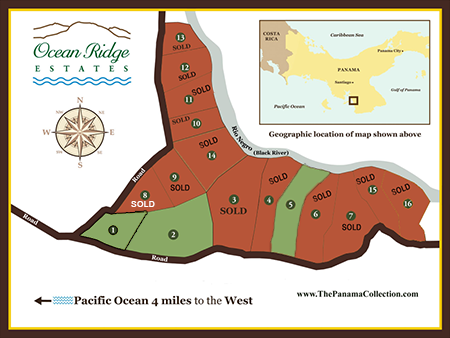 Ocean Ridge Estates is located on the western slope of the Azuero Peninsula, and is possibly the only mini-ranch project in Panama, with estate lots ranging from 4 – 12 acres. When you purchase land in Panama, you have many more creative options on how to use your property. You can stable horses, grow large fruit orchards and/or gardens, put in walking trails, extensive landscaping, etc. You will also have a level of privacy that is far superior to projects offering smaller lots.

After searching high and low, The Panama Collection selected Ocean Ridge Estates for its pristine natural beauty and ideal location. Located just 1 hour from Santiago and 3 ½ hours from Panama City it is perfect for retirement and investment real estate.

Some of our many property features include:

Ocean Ridge Estates has many nearby amenities:

Hola future neighbors, and welcome to the final newsletter of 2013. Things are finally drying out after a wetter than usual rainy season, and it’s nice to be looking forward to several months of dry weather. Some great things are happening on the project, so here we go: 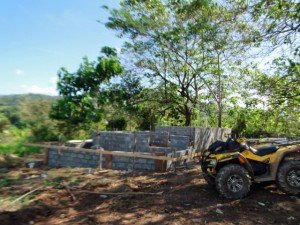 1)  Let’s build another house. When Leo and Willy came to visit from Canada in October, they decided that they liked lot 14 better than lot 5, so that’s the one they bought. They didn’t waste any time – they’ve started building a small guesthouse so they’ll have a place to stay until they build the main house at some point in the future (photo). The house will be done in January, after which the crew will move right over to lot 4 and build a similar house for brother Pieter and his wife Joka. I’m a lucky guy; how many people can say that both of their next door neighbors are named Hoogenboom? 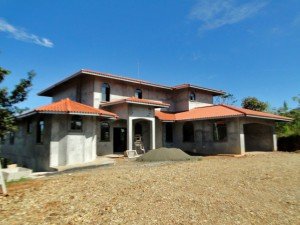 Meanwhile Tom and Stephanie’s house on lot 7 is nearing completion, and looking quite magnificent in my humble opinion (photo). Sometime in 2014 they’ll be having a big housewarming party, and all of you are invited! Well, maybe I should check with them first………..

2)  Residency information. I’ve discussed residency options in past newsletters, but I found a new link that is very good: http://vivatropical.com/panama/panama-visa-and-residency/

The author does a great job of explaining why establishing residency in Panama should be about 50th on your list of priorities when you move down here. You can literally live in Panama for years and years with no residency status of any kind (like me, Patricia and the author), so you will have plenty of time to figure out your best option when you’re living here. 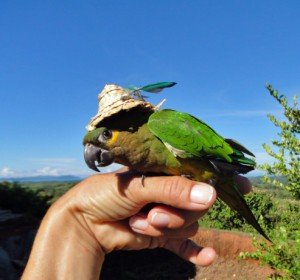 3)  Critter update. Since several of you keep asking, it seems like the Paradise Zoo keeps expanding. Loco is as ornery as ever (photo), Coco comes in from the jungle every day to eat and hang out (photo), and now we have a new daily visitor. Two years ago we raised a couple of baby birds that were smaller than Loco and his siblings (orange-chinned parakeets, if you really must know). We released them into the wild, and assumed we would never see them again. About five months ago one of them showed up with his entire lower beak missing – 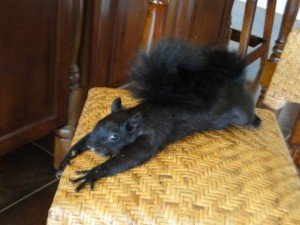 maybe lost it in a fight? He was almost dead, but of course Patricia nursed him back to health, and now he flies in every day for his bread and milk (photos). We named him Teenyweeny, which I think is pretty catchy. 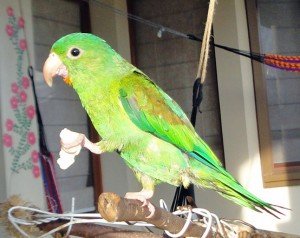 We also continue to see more and more wildlife in the area – check out the toucan in the back yard (photo).

That’s it for this year. Everybody have a great Christmas, Hanukkah, Ramadan, Festivus, and any other holiday that I forgot to mention. 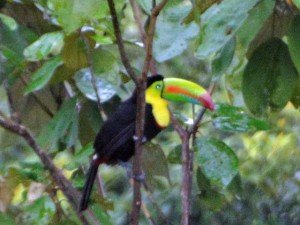 Ocean Ridge Estates features 16 oversized lots ranging in size from 3 – 12 acres each. The community is located on the western slope of the Azuero Peninsula. This is a relatively undiscovered area of Panama. With Panama’s current real estate boom, now is the time to purchase land while prices are still low.

The Panama Collection selected Ocean Ridge Estates for its pristine natural beauty and ideal location. Located just 1 hour from Santiago and 3 ½ hours from Panama City it is perfect for retirement and investment real estate.

The low purchase price includes water, electric, a road to the property, full title, and any assistance you need in building your custom home. This is quite possibly the best value in the entire country of Panama – find out for yourself!